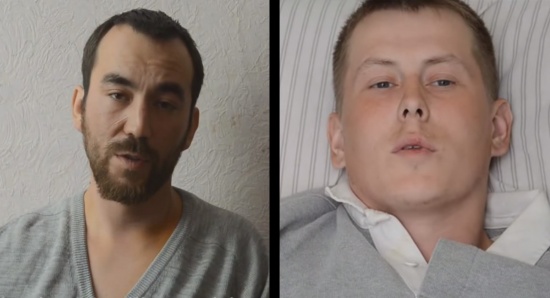 Captured Russian soldiers
The Russians were wounded and taken prisoner near the front line town of Shchastia in the Luhansk region on Sunday.

Ukraine's Security Service (SBU) chief Valentyn Nalyvaychenko on Monday (May 18) accused two captured Russian servicemen of participating in the killing of a Ukrainian soldier and said they would be prosecuted for "terrorist actions", Reuters reports.

Russian President Vladimir Putin's spokesman Dmitry Peskov said that the Russian side is doing everything its power for the release of Alexandrov and Yerofeyev.


On Friday the OSCE and Human Rights Watch officials both reported that the prisoners are being treated well in a Kyiv hospital.

Ukrainian investigators have accused the two Russian soldiers, recently captured near the town Shchastya in the Luhansk region, of setting up a terrorist unit
Made on